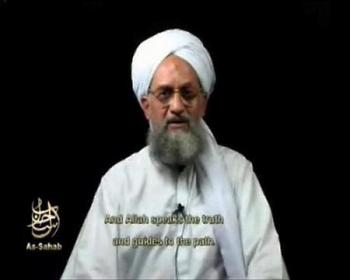 Ayman Zawahiri's paternal grand father was the Al-Azhar's Grand Imam.[2] Another source indicates that his father's uncle, not grandfather, was the grand imam for Cairo's al-Azhar University.[3] The grandfather used to play with him when he was young and strongly influenced him. Many others influenced the jihadi outlook of Ayman Zawahiri like Sayyid Qutb. [2]

Zawahiri later became a member of the Islamic Medical Association after studying medicine[2].

Zawahiri was became a member of the Egyptian Muslim Brotherhood. After that he was jailed and later released.

Zawahiri supports the establishment of an Islamic caliphate and Islamic unity.[4][5]