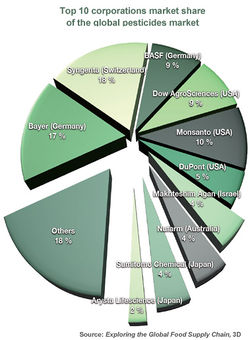 The "Big 6" pesticide and GMO corporations are BASF, Bayer, Dupont, Dow Chemical Company, Monsanto, and Syngenta. They are so called because they dominate the agricultural input market -- that is, they own the world’s seed, pesticide and biotechnology industries.[1][2]

According to the United Nations Conference on Trade and Development (UNCTAD), corporate concentration of the agricultural input market "has far-reaching implications for global food security, as the privatization and patenting of agricultural innovation (gene traits, transformation technologies and seed germplasm) has been supplanting traditional agricultural understandings of seed, farmers' rights, and breeders' rights."[3]